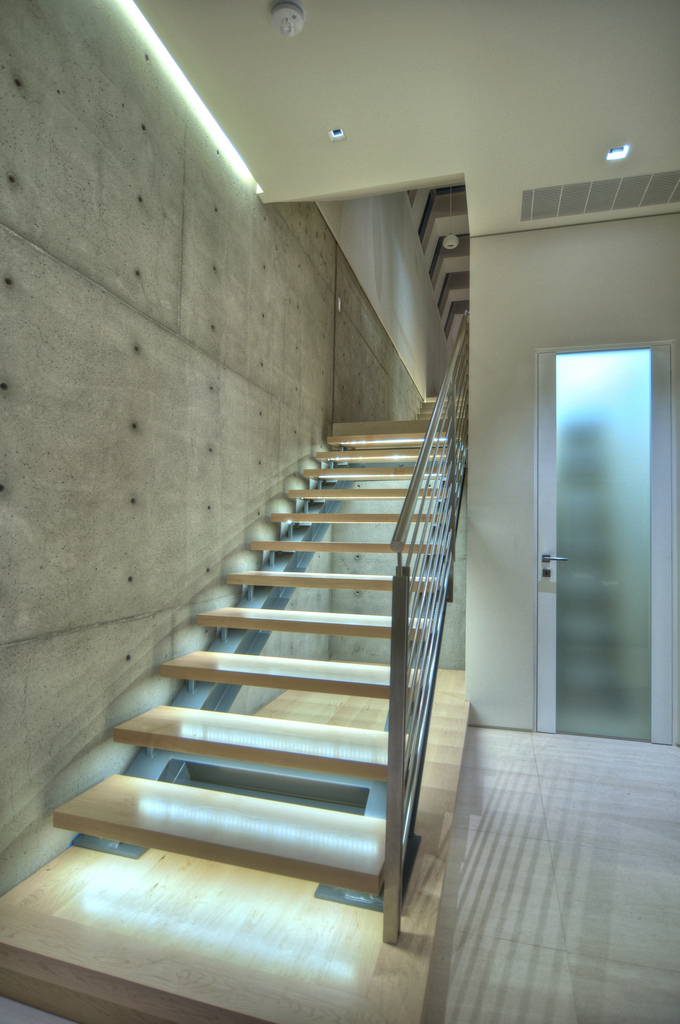 Automatic LED stair lighting with motion sensor is a finding of modern electric engineering that allows the owners of multi-layer apartments and country houses to possess the “smart” lighting. Movement along the staircase may be connected with some inconvenience. For example, when going up to the second floor with the switched off light at the first floor there is a risk of stumbling over the step and even falling. Such an opportunity isn’t attractive at all. Safe movement along the staircase can be provided with automatic lighting by LED strip. Step lighting actuates at the moment of movement start at the staircase thanks to the motion sensors located at the first and at the last steps.

Smart LED lighting has some advantages:

• Economy. Consumption of LED energy resources is in 20 times less in comparison with incandescent lamps. Besides the step lighting operates only when someone moves along the staircase.

• Flexibility. LED strip is a flexible circuit with LEDs connected to it that allows regulating the required length.

• Wide color palette of the lighting making the LED lighting to be an irreplaceable decorative element of any interior.

• No need to switch the lighting on/off. The step lighting goes on automatically thanks to the motion sensors that significantly facilitate the movement along the stair way at night.

• LEDs almost don’t generate heat and don’t warm up any surrounding objects so one can’t bother that the LED lighting will promote the inflammation.

• Long service life. Service life of LED strip is up to 50 thousand hours of work.

Connection of LED lighting strip isn’t executed directly. One should purchase two modules with the strip: controller for the lighting power conversion and module for power connection. LED strip selection depends on the type of steps used in your staircase. LED strip can be connected to the projecting steps with the adhesive substrate. Standard stairway steps are finished with special profile. LED step lighting can be mounted by your own means. As a rule the aluminum covers are put on the steps excluding the damage and accidental deformation of LED strip. LED strip is mounted into the slots of aluminum covers.